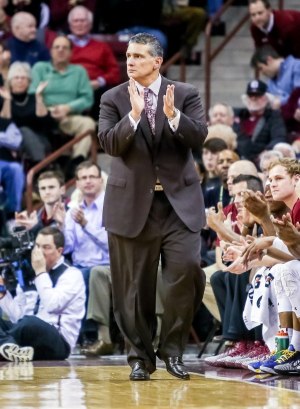 So it has been for the South Carolina Gamecocks and their head coach, Frank Martin, who have become a Tournament darling, especially after dismantling love-to-hate Duke and beating up Baylor along the way. (The darling label also was helped when Martin honored a Sports Illustrated for Kids child reporter’s perfect question and another time commented about today’s adults being the problem in society instead of kids.)

The extended run has even provided enough time for national reporter Bill Reiter to dive (again) into why Frank Martin isn’t at Kansas State anymore and opine (again) that the University of Tennessee is riding John Currie’s ego into administrative hell, probably.

Indeed, from wins to the podium to media good feels, Martin has had a perfect tournament. He has basked in its stature-building spotlight and only kind of had to share it with Gonzaga and Oregon. (Nobody has really even mentioned Final Four old-hat North Carolina, which might be scary.) Nope, this week has deservedly mostly belonged to Martin, who has appeared more ready than ever to, as he has said in the past he tells his players, “live in the moment.”

Having covered Martin’s tenure up close at Kansas State from start to finish, it’s intriguing to watch the man now and think he was this close to this year perhaps being his second Final Four.

In the 2009-10 season, Martin coached the fastest point guard in America in Denis Clemente and had him paired with K-State’s future all-time leading scorer, Jacob Pullen. Curtis Kelly was silky smooth and sneakily tough on the glass, while Dominique Sutton was the kind of guy a 15-year-old Sindarius Thornwell should have been dreaming to play like some day. Luis Colon provided some anchor toughness in the post, while Jamar Samuels was a pogo stick around the rim on both ends of the floor. The third senior in the three-man class with Clemente and Colon, Chris Merriewether averaged less than 1 point per game and 1.4 rebounds, but he appeared in 33 games because he poured his life into his eight minutes per game.

In that vein, every one of them (and several others) played exactly the kind of intensity and defense people are now losing their minds over with the Gamecocks. And, just like South Carolina now, it served K-State well. After handling North Texas, the Wildcats saw Pullen outduel Jimmer Fredette and No. 7 seed BYU. Then, in one of the greatest Tournament games ever played, K-State outlasted Jordan Crawford and No. 6 Xavier, 101-96, in double overtime. Just two days later, No. 5 Butler upended K-State’s run in a game where it was impossible not to wonder about fatigue.

“I’m sure we would of had a better chance [of making the Final Four]. We played a lot of basketball against Xavier,” Curtis Kelly told me this week. “As the [Butler] game went on, though, I can tell the overtime took a toll more then I gave it credit for.

“Butler was a great team, with a really good pro player in Gordon Hayward. So I’m glad we lost that year to a team that made it all the way.”

It’s impossible to say, of course, whether the double OT really was the ultimate factor that kept Martin and K-State out of the Final Four. But, considering K-State had beaten Xavier earlier by 15 that season in Manhattan, it’s hard not to seriously consider.

Back to the present, though, and Martin’s core fire is just as hot now as it was then. The love for his players also is there just the same. However, the same coach who once said in postgame about that 2010 KSU squad (following a Big 12 Conference win over Texas), “If they don’t come in ready to work tomorrow, I will destroy them,” now appears to have settled into understanding the fire doesn’t have to be an earth-scorching inferno all the time.

Tiredness aside, it makes you wonder if that added maturity is the last little something that might have been missing seven years ago in Manhattan but will be enough to propel Martin and his current group all the way. After all, the overall approach has gotten this team, a No. 7 seed that hasn’t been ranked in the AP Poll since Feb. 13, this far.

South Carolina is talented. It is tough. It is battle-tested. It offensive rebounds you into submission, and it can shoot the 3. And the defense, of course, is ferocious. Most of that is the result of its head coach believing in his guys and refusing to allow them to believe less. (Even if people like me believe far less – as recently as earlier this year.)

That’s a really scary, proven-winner combination if you’re the on the other side, and if it so happens that the Gamecocks make the National Final, nobody should be all that surprised. Not if they have been paying attention.