If you are a Tron investor, and you freaked out last Wednesday during an admittedly pretty brilliant crypto market crash, you’re doing it wrong.

Why? Because you don’t understand what Tron was, is, or intends to be throughout its existence, despite many knowledgeable people – who are openly in awe of the shifting tech landscape – begging you to pay attention.

It’s not about the coin, or yesterday’s price, or last month’s price, or tomorrow’s price, or the coin’s price even three or six months from now. The coin, frankly, is irrelevant because it is such a tiny piece to what actually transpired when BitTorrent changed hands and became part of the Tron system.

And what that means going forward.

The first mistake many folks make when capping Tron’s potential is using its age. True, the company is barely a year old. However, from the moment Justin Sun breathed Tron into existence, he entered an ongoing race that wasn’t complete until the contract papers dried this summer. It was a race to own something other mammoth companies, like Facebook and Twitter, that have or had used BitTorrent for key system upgrades. It was a race to own the system that another company very badly wanted to use and pay seeders for torrents using Bitcoin (and later, Bitcoin Cash). It was a race to own the protocol that Bitcoin itself is based on.

That sounds kinda cool, right? But, how important is that really? Well, consider what Bitcoin itself actually does. And, also consider why all of those companies (and many others) also sought to control BitTorrent to the point that Sun had to get a court order to prevent any other negotiations except for his.

“In the same way the Internet flattened access to information and allowed anyone in the world with an Internet connection to learn basically anything they wanted to know, and to communicate with anyone else on Earth, Bitcoin does that with money,” says Erik Voorhees, Founder & CEO, Shapeshift, in “Bitcoin: Beyond the Bubble” (see below).

“So now, anyone on the planet, no matter their age or the arbitrary geographic location in which they were born, or the arbitrary rules of the people who govern over them; that person can now engage economically with anyone else in the world directly,” he says. “And, that’s profoundly powerful.”

With that in mind, and then pairing that info with the understanding that Bitcoin does for money and financial transactions what BitTorrent does for peer-to-peer file sharing in general, including full websites, you begin to understand the power that Voorhees spoke about. 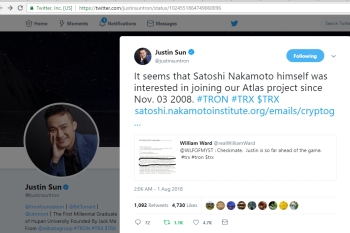 BitTorrent unlocks the whole damn thing. It always has. Even Satoshi Nakamoto knew it.

That’s what “decentralization” means. That’s what Justin Sun means when he says it (and he says it constantly). That’s what Tron means every time you read it – from marketing to whitepapers to social media.

I’ll say it again, and I want you to slowly read each word. Let it sink in.

(And, at a reported $120 million, he did it for the same amount of money the Baltimore Ravens once paid Joe Flacco to be a slightly above average NFL quarterback or roughly one-third of what Giancarlo Stanton once signed for with the Miami Marlins.)

In essence, Sun reverse engineered digital dominance by starting with a platform, while also figuring out a way to ensure token burn and supply freeze – all while keeping his investors engaged through the whole process. It’s the birth of an entire ecosystem that uses many pieces that couldn’t quite put it all together in the past.

His system is every computer, every user. You aren’t just using Tron when you jump on to download or seed a file. You are Tron.

So, if you’re really and truly interested in seeing your investment grow. Be a user. Encourage others to use. Brush off your old Napster skills and get BitTorrent up and running. Use SeedIt to tip others with Tron on Twitter. Participate in Super Representative elections. Buy tokens that represent projects already calling Tron home. If anything, just get a Tron wallet created.

Do any or all of that, and you’ll be handling your Tron investment the right way.

What topics would you like to read about as we all grow with Crypto, Tron, and all the rest? Shoot an email to kitchenski@gmail.com with “Blog idea” in your subject line, or find me on Twitter at twitter.com/curtiskitchen.

And, FULL DISCLOSURE: I am a Tron (TRX) investor. I am not a financial advisor. This content should not be used as a base for or considered to be financial advice.

2 thoughts on “What don’t you get? With BitTorrent, Justin Sun (Tron) bought the entire Internet”

This site uses Akismet to reduce spam. Learn how your comment data is processed.